Want to know the 9 habits of healthy shoppers? Get your free guide and shopping list here!

PRESCRIBING THE POWER TO EAT WELL

This week, I’m delighted to bring you a guest blog from Dr Jo McCormack, a GP who became disillusioned with the constant stream of medication being pushed to her patients and began looking at the importance of diet. This is the story of how she discovered the power of eating well.

I’m a conventional NHS GP based in Warrington and have been working as a doctor for 30 years. In that time, I’ve dealt with countless patients and diligently prescribed the appropriate drugs and treatments in an effort to help them live well.

But, in 2014, I had a shock to the system. I realised that the standard nutritional advice I had been asked to give out for 30 years was wrong for a lot of people. I had already stopped giving it out, because I never saw it working – but the confirmation that it was completely off beam for so many patients was staggering.

Let me explain. For a long time I had been disillusioned about the vast numbers of drugs we prescribed. No one was singing and dancing on them; nobody got really super-healthy on them. I would see 90+ year olds on 10 to 20 different drugs, curled up in a bed all day or wandering around in a demented state. I would see younger people who felt low all the time, despite being on multiple drugs designed to combat this.

In one year, all the people who had heart attacks in our practice had a normal cholesterol. What was going on?

It was demoralising, a waste of time, money and effort, and also potentially harmful.

The turning point came when my sister, Denise, developed a rare condition called ankylosing spondylitis (A.S). Years ago, the only treatment was physiotherapy, but now people are additionally prescribed steroids, anti-inflammatory tablets and disease-modifying agents like Humira and others. Sadly, she did not respond well to the first two and did not want to take Humira. She then found out about a dietary method of helping A.S and not only did her illness go into remission, but she also lost weight, in spite of no exercise, and taking oral steroids. In 27 years, I had never seen an immobile person lose weight while on steroid tablets, never mind simultaneously recover from an inflammatory disease. It was astonishing. My intrigue continued when one of my patients recovered from the same illness with the same way of eating – could this be more than a one-off?

The diet is called the London A.S diet and it is a low-starch diet. It doesn’t work for everyone, but it is a treatment option and if it works for you it will save the NHS or your insurers thousands in drug costs alone, plus you go back to work feeling well, with fewer hospital appointments, blood tests or prescriptions. Not to mention avoiding pumping your system full of unnecessary drugs.

At that point, I started reading about one way of eating after another, and added the sensible ones to my other non-drug methods like hypnotherapy, Pilates, yoga and mindfulness. My patients leave my surgery armed with information they need to make simple lifestyle changes that could save them from years of prescriptions.

One way of eating in particular caught my eye and I started it myself as an experiment to see if it made any difference to my own health. You see, I was concerned about my risk of diabetes, weight gain and dementia and it sounded as if it might be helpful – and it definitely was.

After three months I felt very well and lost two stone on a way of eating set out in ‘Grain Brain’ by Dr David Perlmutter. This diet focuses on ‘real’ and unprocessed foods, with less of the foods that are naturally high in sugar and starch. How much less depends on you, and what you want to achieve. It is very low in sugar, which is important – as the table below shows. 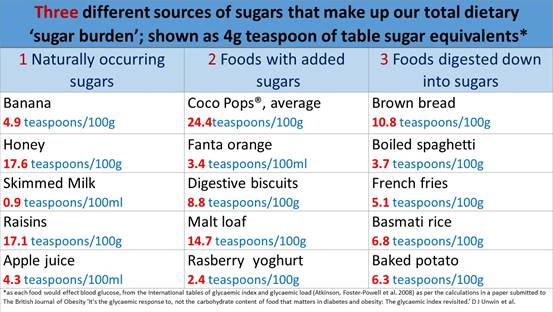 If you would like to follow one of my approved ways of eating, look at my website for ideas. It’s easy to prove which method works best for you, with the aid of a set of scales, a tape measure and blood tests if needed. Not to forget – and perhaps most importantly – being mindful of how your body is functioning.

I’m still an NHS GP and now use the website to give people information beyond the standard 10 to 15-minute GP consultations. I ask about what people eat and drink in nearly every consultation because it’s important when it comes to building an accurate clinical picture. People need the right fuel for their bodies, and if their body is malfunctioning, nutrition is one of the key things to address. Others include sleep, movement, stress management, relaxation and habit change.

What I do now feels a lot more worthwhile than it did before. I have strangers coming up to me and telling me they are doing “my diet” and I say I’m glad they like it. However, it’s not a diet; rather, it’s a way of life, and it’s not mine. It’s there for the world.

So do have a read, give it a go, and let me know how you get on. I will be very interested.

For more information, visit www.fatismyfriend.co.uk or contact Jo via joannemccormack@nhs.net.

The secret to getting more done…with less stress

My mantra with all things work-related used to be a resounding “crack on!”. As overstretched managing director of a [...]

How to conquer lockdown lethargy

As lockdown drags on, I’m hearing more and more people saying that they are struggling to get through the day and [...]

Discover what your top character strengths are – and how they can help you through the corona crisis!

Even without the help of a global pandemic, human nature pushes us to dwell on the negative. We’re more affected by [...]

This website uses cookies to improve your experience while you navigate through the website. Out of these, the cookies that are categorized as necessary are stored on your browser as they are essential for the working of basic functionalities of the website. We also use third-party cookies that help us analyze and understand how you use this website. These cookies will be stored in your browser only with your consent. You also have the option to opt-out of these cookies. But opting out of some of these cookies may affect your browsing experience.
Necessary Always Enabled

Any cookies that may not be particularly necessary for the website to function and is used specifically to collect user personal data via analytics, ads, other embedded contents are termed as non-necessary cookies. It is mandatory to procure user consent prior to running these cookies on your website.